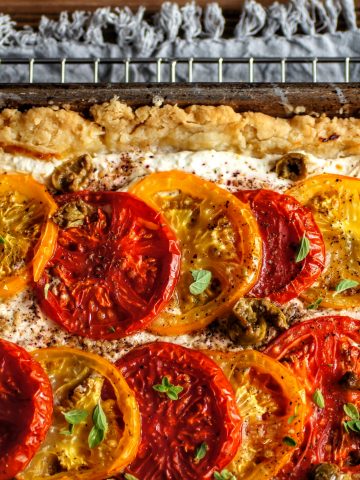 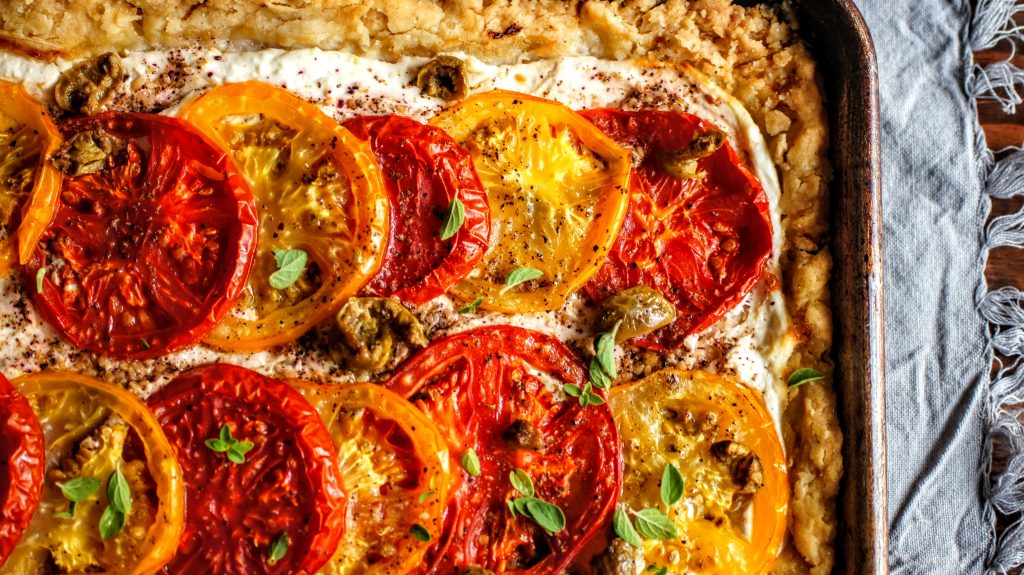 Summer is beginning to look like a distant memory at this time. But if you're like me and have a few lingering tomatoes on your vines or can still find some beautiful ones at the Farmer's Market, this tomato pie won't disappoint. Traditional slab pie style made savory and with a Lebanese twist. If you know anything about me, you probably know that one of my all time favorite foods is manousheh, basically a Lebanese oregano/thyme pizza, topped with zaatar. Manousheh is really a blank canvas like a pizza to add all your favorite goodies. Mine include: lebneh, olives, tomatoes and mint. Since I had so many tomatoes on hand, I wanted to make a manousheh inspired tomato pie. A little bit country + a little bit Lebanese. 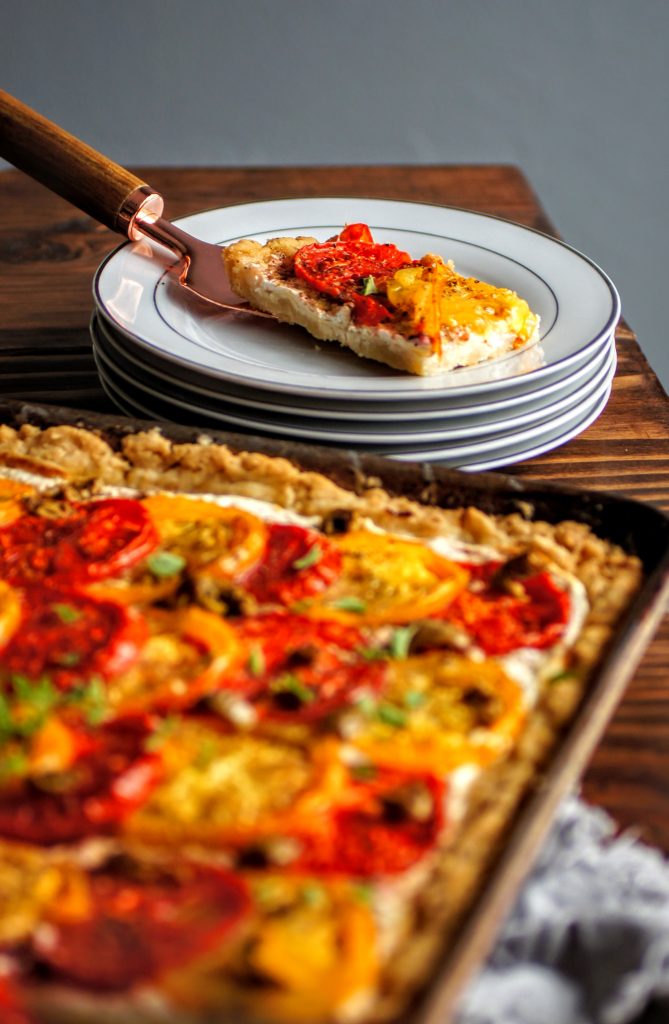 Zaatar is the base of manousheh, zaatar is widely available at middle eastern stores premixed, you can also find it Amazon pretty inexpensively. It is a blend of sumac, oregano, thyme and sesame seeds. It is extremely aromatic and so delicious. If I purchase a pre-mixed variety I often add to it to enhance the flavor: add in some extra sumac (which gives it a lemony flavor), some salt, some additional toasted sesame seeds, dried oregano. A little enhancement makes a world of difference! It just gives it a bit of an umpf. I'm currently a bit spoiled and using a mix my dad made for me with herbs directly from Lebanon, it's basically heaven in a bag.

Lebneh is the sour cream of Lebanon. It is a staple ingredient and at every dinner and breakfast. Homemade tart yogurt. In America all our yogurts are sweetened but in Lebanon yogurt is enjoyed in its truest, simplest form. Drizzled with olive oil, some dried mint and pita bread, it's an amazing dip.

Making lebneh is pretty easy, some milk and a yogurt start and heat, you'll have delicious homemade lebneh (I will have a step by step post soon). Most natural food stores or international grocery stores will carry it as well. You can also sub Greek yogurt, which is very similar. Lebneh tends to be slightly more tart and tangy than Greek yogurt.

I decided to use pie dough vs pizza dough, but pizza dough would work great too. The pie dough definitely gives it more of a flaky, delicate base which I enjoy and especially for a brunch. Store bought pie dough is fine, I prefer to make my own and my go-to is Pioneer Woman's Perfect Pie Crust. I like to use ½ cup butter and the remainder Crisco, I know, Crisco is bad but it sure does make a delicious pie dough! I have tried using all butter for this and it just doesn't hold up as well, so I do recommend the exact version or opted to sub ½ cup only of butter. But please use your own tried and true recipe (it can also be Pillsbury or whatever other brand you like, no one is judging!)

So now all these amazing ingredients put together into a pie with fresh tomatoes seemed like a great idea. Check out the steps below and as always, I hope you enjoy. I love to see your creations, tag me on Instagram @CosettesKitchen or post on my Facebook Page. 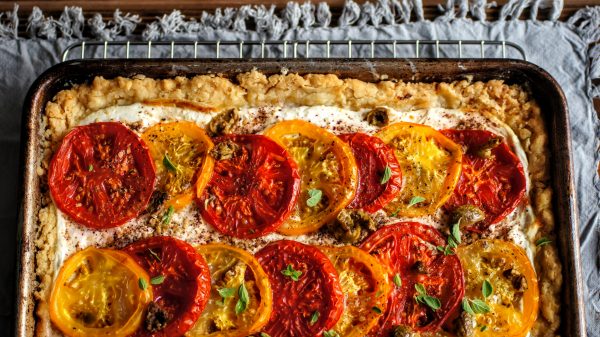 Cosette's Kitchen is a participant in the Amazon Services LLC Associates Program, an affiliate advertising program designed to provide a means for sites to earn advertising fees by advertising and linking to Amazon.com.